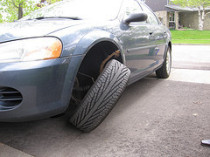 When a wheel hits a pothole, it falls into the hole and has to emerge. It is rare that the entry that causes the damage; rather it is the exit. The amount of damage depends on the diameter of the tire, the depth and length of the pothole and the speed of the vehicle. When a wheel passes over a road’s contours, most of the force exercised on the suspension is directed upward because the contact is made with the bottom of the tire. The higher up the tire the impact, the more the force of the impact tends to push the wheel both backward and upward. The smaller the diameter of the wheel, the more severe the impact, especially if the depth of the hole is the same as the diameter of the wheel.

Longer potholes cause more damage because their length means that at practically any speed, the tire risks hitting its bottom before being able to emerge. Similarly, low speed can result in damage to the vehicle’s frame or platform because, here again, the tire has time to hit the bottom of the hole.

When a tire hits the inside of a pothole, it is pushed both backward and upward, which transmits the shock to the wheel, the suspension and the steering. The most likely results of a severe impact with a pothole are one or more of the following: loss of a hubcap, a damaged tire, a bent or broken wheel, a wheel knocked out of alignment, damaged suspension, bent steering parts, damaged shock absorbers.

Alignment constitutes the adjustment of all the wheels on the vehicle so that they turn in a fashion which allows the maximal contact between the tire and the road. The alignment of the wheels has a direct impact on the longevity and safety of the tires, as it influences the direction of the vehicle, its performance, and the wear of the tires. If the wheels are not properly aligned, the steering of the vehicle is affected and it is difficult to drive in a straight line. A vehicle which is improperly aligned may also have a negative effect on suspension components, so it is best to perform an alignment in order to keep the value of your investment, and your sanity!

The alignment of the wheels should be checked every 20,000km and especially after a collision, hitting the sidewalk, hitting a pothole or anything else which may have damaged the suspension. An alignment should also be performed if there is an uneven wear of the tires or if there is a change in the direction of the vehicle, particularily if the car "pulls" to one side.